Simon Lawrence is a talented jazz singer and multi-instrumentalist. Last week I photographed Simon during a sunny afternoon at Kensington Gardens. Please see the photographs and full interview below. 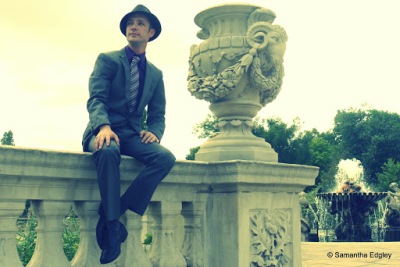 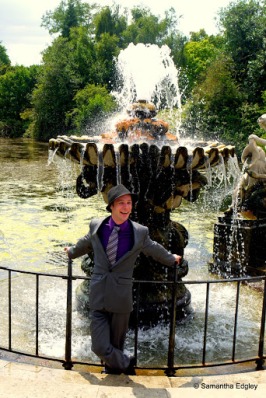 What inspired you to start playing music?

I’ve loved music for as long as I can remember. In our household we were always singing. On long car journeys we’d listen to countless cassette tapes of different artists. Also there was a piano which, even as a toddler, I would plonk around on! So my biggest inspiration to start singing professionally was just a natural transition from singing all the time at home anyway.

First time on stage
The one I remember most clearly was a school Christmas production. We all sang “The Twelve Days Of Christmas” but each day had been changed. My day was “On the third day of Christmas my true love gave to me, three disco dancers…”. I then danced as Michael Jackson to “Smooth Criminal” whilst two others did a disco dance in the background. It was hilarious! I think my Mum still has the video. I was even dressed in a little white suit and white hat just like the Michael Jackson music video, haha! 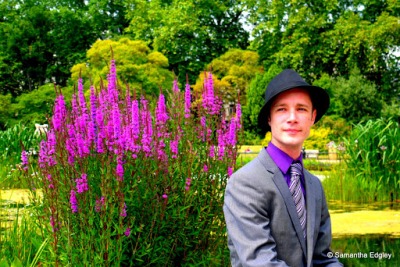 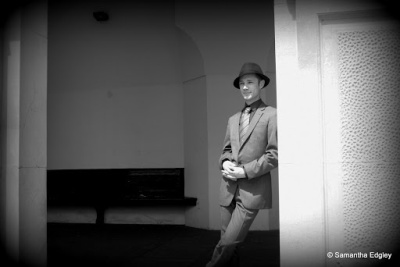 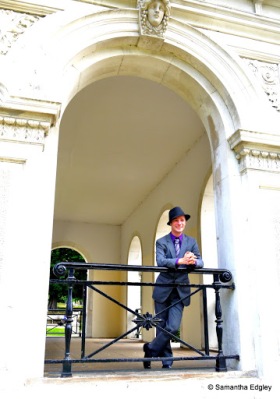 Musical instruments
I play piano and guitar. I took piano lessons for a few years but had a pretty awful teacher. I wanted to play jazz songs but they were insistent I played classical, so I gave up on lessons and just played what I wanted to play. With guitar I’m self taught and like to play finger picking style on an acoustic guitar. I also write most of my songs on guitar too. 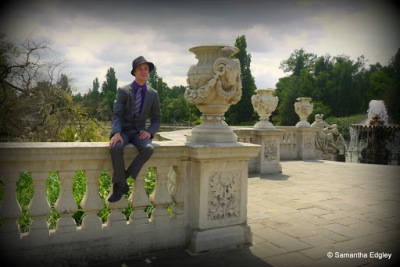 Musical background
I got a choral scholarship to Wells Cathedral School, and that was really the start of my professional training. Even though I was very young I was lucky to have a Doctor of music teaching me how to sing. The many times a week the choir had to sing in the Cathedral, plus travelling the country to sing at different venues really taught me discipline and tenacity in performance…

… After Wells I went to Mountview drama school, which has some exceptional musical theatre teachers and vocal coaches. There was one singing teacher, Phil, who I learnt so much about the science of how the voice works. His techniques have been extremely useful. I occasionally give one to one singing lessons and it’s thanks to teachers like Phil that I am able to do that. 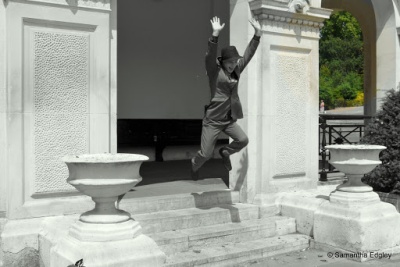 What attracted you to jazz music?
My Mother is a massive jazz fan, particularly Sinatra. So she is always playing those great crooners of the past. On car journeys we would all sing along. I knew all the words to so many jazz standards off by heart and I would try and copy the way they sang…

…Then one day, I guess when I was about 15 or 16 and my voice had started to develop into a baritone, I was singing along in the back of the car and my Mum spun around in her seat and said “You sound just like him!” So I guess the next logical progression was to start singing Sinatra songs at gigs. But that professional leap didn’t happen for a few years, until I was about 20. 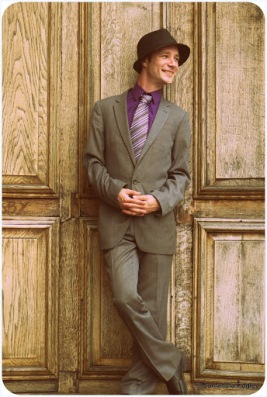 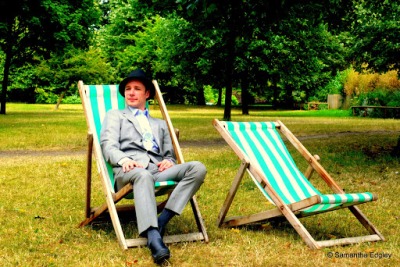 Current involvement with music
I divide my time between singing jazz standards at corporate events and Weddings to my other passion which is writing and performing songs on guitar. It’s totally different from the jazz work I do, it’s much more laid back singer/songwriter material. However, I am now getting back into composing jazz songs again…

… I’m about to release an acoustic EP, but I think my next project will be working on some original jazz songs. I already have a jazz album on amazon (http://www.amazon.co.uk/Streets-And-Bars/dp/B002N9A5SI/ref=sr_shvl_album_1?ie=UTF8&qid=1374048300&sr=301-1) but that was mainly other peoples songs. I’d like to do an album of all my own material. I wrote a jazz song recently and had forgotten how much I enjoyed writing songs in that style. 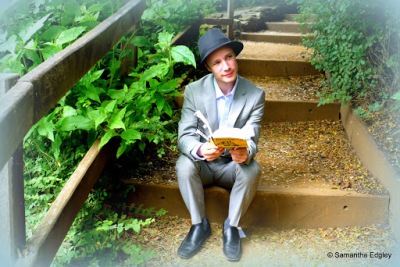 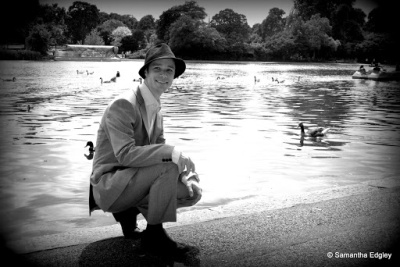 Current musical influences
It goes without saying that Sinatra is my biggest influence, but also Dean Martin, Vic Damone and Bobby Darin. I love Bobby Darin, the man could sing in any style, he was incredible. And as for Sammy Davis Jnr? The man was a phenomenon. Out of the whole Rat Pack he was the most multi-talented. I also have modern influences for my acoustic songwriting material. David Bowie, Paul Simon, The Smiths, Radiohead, Muse and Jeff Buckley.

What inspires your own songwriting?
Personal experience and storytelling. They are the two key things for me. It’s not that I believe the saying “write about what you know” because I believe in imagination and you can write and feel about things out of your own sphere… 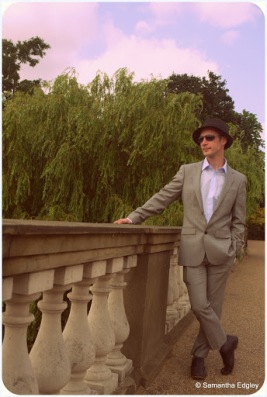 … But I generally prefer to write about things that I have experienced. I like to write about relationships and what they mean, and the complexities of how we feel about one another. For example my jazz ballad, “I don’t love you (but my heart does)” was about a time when I fell for a girl I was acting on stage with. I had a girlfriend at the time and she had a boyfriend, so nothing happened. But I was torn between the “I can’t love you because we’re both in relationships” and the “my heart is saying another thing”… 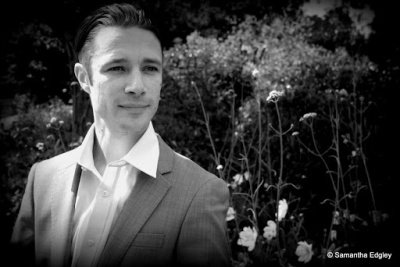 … The storytelling side is also important to me. Two of my favourite songwriters, Paul Simon and Neil Hannon (of ‘The Divine Comedy’) are genius storytellers. They paint a picture, you see it moving in your mind as you listen, like a movie on the big screen. My indie pop song, “Salesman Smith” is very much a story. It tells the tale of a travelling salesman who has a dull life at home but seeks excitement when he’s on the road. He meets a tragic end, so the song has a narrative to it. 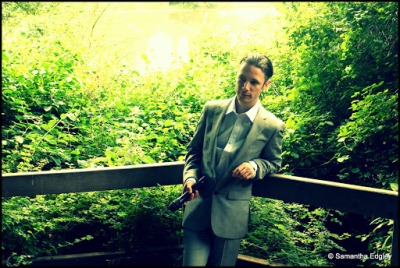 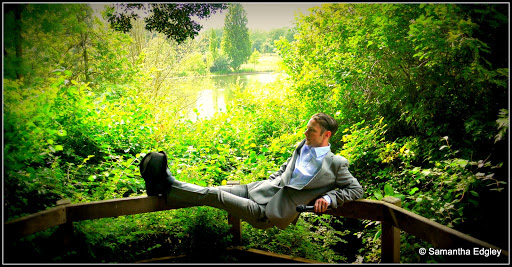 Future plans
I’ll be releasing my solo acoustic EP, “Gunslinger” in the next month or two. I am also trying to get on the books of a big entertainment agent for my Sinatra singing. At the moment I mostly get corporate gigs and Weddings off my own back, but I want to increase the amount that I am working, and so I think I need a busy entertainment agency for that. One that has a large turnover of events… 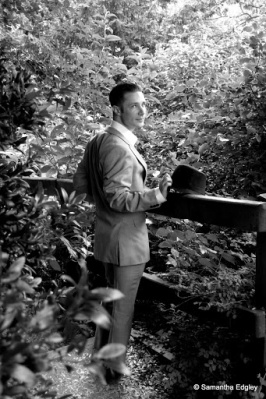 … It’s my dream to one day move away from just piano/singer duo and small jazz band gigs, where it’s just a trio or maybe a quartet. They are fun to do but I’d love to sing with a 16 piece jazz orchestra, singing a mixture of jazz standards and original compositions. With a band that big then you can really swing and do true justice to those wonderful jazz standards…

… If there are any jazz musicians out there who’d like the adventure of starting up a fun, larger than life swingin’ big band, then get in touch and let’s raise the roof off every venue we perform at!

Please check out and ‘like’ Simon’s fb page for more details of gigs and recording activities:
https://www.facebook.com/simonsings
Many thanks for visiting my blog
Samantha x
Beside the See Side